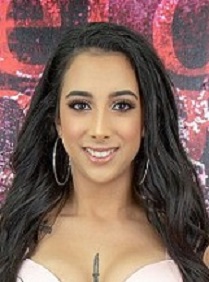 Once again we present one of the newer, up and coming star4lets in adult films. This exotic beauty has only been on the business a little over a year but shows great promise. While things have shut down for now because of the pandemic, when they return this young lady will be heard from. Her name is Kiarra Kai.

She was born on September 16, 199 in the surburban town  of of Riverside, California. She comes from a very supportive and loving family, did her schooling in the area. Those exotic looks, the long black hair, dark brown eyes and those curved features come from Kiarra being a descendant of the Navajo Indian tribe.

When Kiarra turned eighteen she jumped right into web cam modeling and she was an instant hit. She liked the fact that she was being watched, turning people on and making them feel good, doing her shows on MyFreeCams. Kiarra had some sexual experiences in her teens with both guys and gals, so  performing on web cam seemed like a natural.

In January of 2019 Kiarra decided the time had come to take the next step forward. That was to go from webcam shows to hardcore scenes on film. She did her first scene for Bangbros and it was obvious right from the start that this young lady had “it”. It was also obvious, and she admits it, that she loves giving blow jobs, and we must say she is incredible at it.

From there things just began to take off for her. With her very exotic Native American looks, a fantastic athletic and fine tuned body along with a wealth of talent, the film roles began to come her way. Kiarra did some very explosive scenes for Team Skeet as well and others soon followed. S he also displayed some decent talent as an actress.

During 2019 and now into 2020 before things had to shut down ,this long haired eyeful did scenes for BangBros, Evil Angel, New Sensations, Forbidden Fruits, Girlfriends Films and others  You can find her web scenes on TeamSkeet, AMKin gdom, realitykings, cherrypimps and a lot more. Once things are back to normal there will be a lot more to add.

You are in for a very special treat watching Kiarra perform. If you have not seen her as yet here are a couple of suggestions that you need to take a look at. There is the recently released “In the Room Watching My Girlfriend 3” from New Sensations, a look at her girl/girl talents in “Lesbian Pyschodramas 32” for Girlfriends Films. These will definitely make you a fan.

Because of her Native American background, the “Navajo Princess” as some call her, has a very different, striking look. But make no mistake she also possesses the sexuality, passion and intensity to make her scenes very special to view and enjoy. We think the future is a very bright one for this young lady. I am very pleased to have Kiarra Kai as my “Girl of the Week” here on AAN.

Girl of the Week – Lana Sharapova