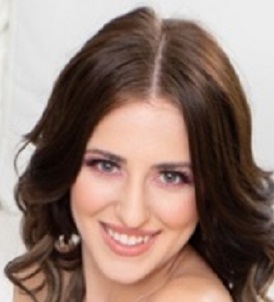 This week we introduce you to one of the newer, brighter faces in adult. She has been on the scene since late 2019 and has been making major inroads in the industry with her all out, explosive performances. This long haired brunette with the sexy hazel eyes is a star on the rise. Her name is Aubree Valentine.

This long haired beauty was born in the small town of Hurricane, Utah on April 19, 1998. She grew up there along with her sisters and also attended school there as well. Aubree was pretty much an introvert and got bullied a lot in high school. The family relocated to Las Vegas.

Out of school now and with a little more freedom she was working at the Omelette House in town. Being a daring and athletic girl she also got into riding dirt bikes professionally for a time. Still with all this there was something that was missing from her life and would bring about a big change.

Aubree is a very intelligent, smart and well-spoken young lady and felt that web camming could be a lucrative way of making a living. So at age 18 she began doing some camming and quickly built up a strong fan base. Spoon after getting started she made her Snapchat profile where she was creating her own content.

If you have yet to see this beauty in action check her out in “She’s My Hotwife 2” for Digital Sin and the brand new “Women Seeking Women 186” for Girlfriends Films. With the industry back at full strength you can expect see even more of this young lady along with award nominations and some big major projects in the future. I am very pleased to introduce Aubree Valentine as my “Girl of the Week” here on AAN.

Girl of the Week – Kiara Cole