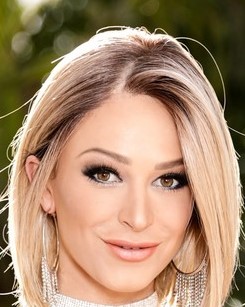 Girl of the Week – Emma Hix

This sweet looking blonde comes from north of the border and has been on the scene since 2016. She has continued to make a steady rise up the ladder with some blistering performances, both as a performer and actress. This talented young lady has been one very busy girl in 2022 and is definitely an A lister in adult who has so much to offer. Her name is Emma Hix.

So how did this fresh faced blonde get into the business? First of all Emma already had made up her mind this was what she wanted to do. Emma had been watching Derrick Pierce perform in films for a couple of years. So, when she turned eighteen she dec ided to go right to the source. She got in touch with him via Instagram a and asked for some advice about getting into adult films.

Derrick gave Emma some advice on various adult film talent agencies which led to Emma contacting all of them, getting feedback and then making a choice. Emma ultimately signed on with Foxxx Modeling mainly because they were the ones she felt most comfortable with. This all took place back in 2016 and    a new career path was about to begin  taking shape..

At 5’4” with long blonde hair, sparkling hazel eyes that are very telling, a great smile and an all natural 34B-24-34 figure this Canadian beauty makes quite a picture. There was no question that once she got in front of the camera it would be an instant love affair between her, the camera lens and those who would being viewing this all natural stunner in action.

Since that beginning just a few of years ago Emma has done work in a variety of genres for Evil Angel, Kick Ass, Dark X, Wicked Pictures, New Sensations, Girlfriends Films, Jules Jordan, Reality Junkies, Digital Playground, Zero Tolerance and others. As for web scenes there is TeamSkeet, Girlsway, Blacked.com, Nubile, Digital Playground, Vixen and more.

There is so much to like about this Canadian cutie. She has a great look, an all natural body, a zest for living life and a wealth of talent. Emma continues to have new scenes ready for her fans and in 2022 alone she has really brought sexual sizzle to a new level. This is shaping up to be a huge breakout year and beyond with awards and nominations. I am very pleased to present Emma Hix as my “Girl of the Week” here on AAN.

Girl of the Week – Alice Visby