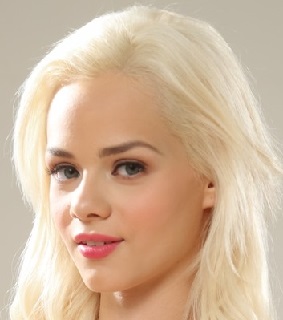 This week we present a young lady who has been on the adult scene for a few years. We first brought her your way in early 2020. But with the pandemic shutting everything down, this young lady kept herself busy pleasing her fans. She has gone from starlet to star with awards and nominations with some riveting and explosive performances. She is blonde, she is petite and she is sexy as hell. Her name is Elsa Jean.

This Barbie like blonde vixen was born on September 1, 1996 in North Canton, Ohio. She grew up in a good, close knit family and was an extremely intelligent, smart young lady when it came to all kinds of subjects. She was what one would call a brainiac. Elsa graduated high school at the age of sixteen. In school she was on the shy side (hard to fathom that now) and dated older guys secretly.

After graduating high school and working in a grocery store and Starbucks she went directly to George Mason University in Fairfax, Virginia. She was studying to be a surgical assistant. After two years of college and turning eighteen and doing well with her studies, Elsa left school and began to take on a much different career path.

From that point on Elsa put school and her studies on the back burner. She dove into the adult industry full force and since that beginning has continually been on the upswing doing a variety of genres and getting many critically acclaimed reviews, awards and nominations. Since beginning Elsa Jean has amassed over 500 films and web scenes.

If for some reason you have not seen this very talented performer/actress and award winning beauty in action then here are a few recent suggestions. There is the recent “One Night Stands” for Bellesa Films, the award winning “Becoming Elsa” for Sweetheart Video, and “Excess” for Deeper.

Now that the industry is slowly coming back in to focus you can be sure that this blonde bombshell will be heard from loud and clear. She has a clear path to stardom with mor awards and nominations along with top flight productions on the way. This extremely smart, talented young lady has the best yet to come. I am very pleased to re-introduce the stunning Elsa Jean as my “Girl of the Week” here on AAN.