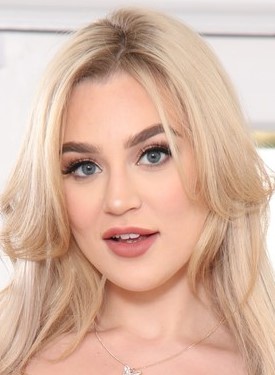 This week we present a young lady who comes our way from Arizona. She is a tall, long haired blonde beauty blessed with an all natural body. She has been on the adult scene almost two years and is really making big moves forward in her career. She is also a nominee in our upcoming NightMoves Awards for Best Female Performer. The link where you can vote for her is at the end of this feature, so be sure to vote. Her name is Blake Blossom.

This vision of loveliness was born on Valentine’s Day, February 14, 2000 and what a beautiful Valentine she has turned out to be. She was raised in a small town in Arizona by her mother and has a younger brother. Blake was raised in a very conservative, Mormon led area, but she never let that influence her life or the choices she made.

She was doing a lot of researches about models, conditions of work and benefits wanting to make sure it was the right move. She met Ryan from Hussie Models agency through a close friend of hers and they had several meetings that they used to elaborate the first steps and strategy for the beginning of her career. So now it was time to take that big step.

Blake signed on with Hussie and began shooting her first scenes in April of 2020 for Exploited College Girls. From there it was a steady rise upward and with each web or film scene, Blake got more and more notice. After all, blonde, long haired, big boobs, all natural, a great personality and plenty of talent what was there not to like?

Blake was doing well and then when the COVID pandemic hit, things slowed down for a bit, but she still found ways to keep her growing fan base happy. There were a few film scenes, some web shows, interaction on the internet as everyone fought through this pandemic in a variety of ways. Blake made the most of the slow down and it paid off.

Then things eased and the industry started coming back and Blake was right there ready to let it all hang out and continue to improve, build up her fan base and make bigger strides upward. She has done a variety of scenes for labels like Hard X, Girlfriends Films, Jules Jordan Video, Bangbros, Nubiles, Hustler, Vixen, Blacked, Team Skeet, SHF, Naughty America and more.

2022 has been a big breakout year for this angelic faced blonde bundle of sexual energy. She can do it all, has immense talents, a great personality and her acting skills continue to improve. She has already garnered some award nominations and the wins are sure to come. One of those nominations is for Best Female Performer at our upcoming NightMoves Awards and you can vote for Blake by going to:  https://nightmovesonline.com/vote-now/  So get those votes in today. She is definitely a star on the rise and I am pleased to present Blake Blossom as my “Girl of the Week” here on AAN.