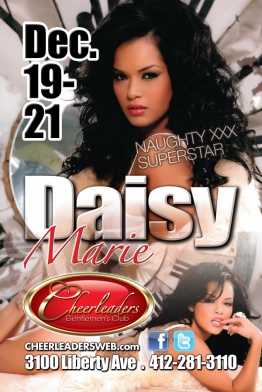 To ensure that your holidays are merry and bright, the award winning Latina sensation Daisy Marie is performing a very special holiday show this weekend December 19th, 20th and 21st at Cheerleaders Gentlemen’s Club 3100 Liberty Avenue in Pittsburgh PA. The performances will also include a Toys For Tots Drive, so bring a toy for a very deserving kid and enjoy the sensational performances.

The adorable and super sexy Latina star will be taking time in between sets to meet fans, sell signed merchandise and take pictures.

Speaking of awards, Daisy Marie is also up again for another AVN Award this year. This time for the 2014 AVBN Fan Awards for “Best Boobs“. You can vote for Daisy Marie right now.

“I’m really looking forward to dancing at Cheerleaders this weekend, and spreading some of my holiday cheer to everybody. I also want to thank AVN for this Fan Award nomination, I love my fans, and I hope all of you will take a minute and vote for me”, said Daisy Marie.

You can tag along with Daisy Marie on her world wide adventures now by following her on Twitter: @1daisymarie , Instagram: @1daisymarie

Fan mail can be sent to: daisymairefans@gmail.com

For more information, or to arrange an interview with Daisy Marie, please contact James Bartholet at Galaxy Publicity 310 652 0770 james@galaxypublicity.com

Daisy Marie grew up in Los Angeles, and career in adult began right after her 18th birthday. Daisy Marie was a co star of the popular Cinemax series, “Co Ed Confidential”, and has graced the cover of many popular men’s magazines. Some of Daisy Marie’s releases include; “Playtime For Perverts” for Baby Doll, “Big Tits at Work” for Brazzers, “Chop Shop Chicas” for Wicked Pictures, and “Young Harlots In Detention” for Evil Angel/Harmony Concepts. Daisy Marie has appeared on the cover of Penthouse in June 2008 and was the featured Pet of the Month. In 2009, Daisy Marie received a FAME Award for “Favorite Underrated Star”. Daisy Marie is a multiple AVN and XBIZ award nominee year after year. Daisy Marie is a huge favorite of industry and fans alike worldwide.

ASSHOLE OF THE DAY!