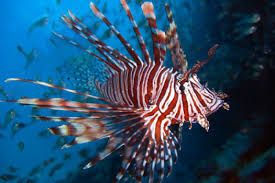 One of the most invasive fish in the ocean isn’t a shark, whale or barracuda it’s the Lionfish. This beautiful fish is not native to Florida waters but have been found in alarming numbers. The Lionfish is a venomous fish that can cause a human to get nauseous, have headaches, temporary paralysis and in some cases cause heart stoppage.  They devour small fish & mollusks and are skilled hunters. Lionfish started showing up in the Atlantic Ocean off the shores of North Carolina, Georgia & Florida in the 1990’s and their population increased by 700% from 2004-2008. They negatively impacts reefs as they eat almost anything and are a major concern to fishermen. The Florida Fish and Wildlife Commission just awarded $250,000 to five organizations to find a way to remove the Lionfish from our waters. They are found in waters up to 1,000 feet in depth so it takes more than a spearfishing gear to kill them. They can also survive in fresh water for a period of time. If you see one of these guys, do yourself a favor and swim away as fast as you can!

Hispanic growth rate is growing rapidly in the Sunshine State. In Miami-Dade, Osceola and Hendry counties Hispanics make up over 50% of all residents. Statewide they make up a quarter of the population. One of the main reasons for the increase is the number of Puerto Ricans who moved to Florida after Hurricane Maria struck the island. The growth rate in North Florida increased by 11% and Jacksonville had the largest Hispanic growth rate this decade jumping by two-thirds. Hillsborough County in Tampa had an addition 16,000 Hispanic residents last year according to US Census Bureau statistics.

Here’s a scary stat … 8 of the most destructive storms in the past 40 years have occurred since 2001. Is it a coincidence or is it because the population has grown in areas that have flooding issues? The majority of the destruction isn’t from wind but from water as flood waters remain long after the winds have deceased. Think of this … 70% of homes that were damaged by Hurricane Harvey near Houston, TX last year did not have flood insurance. The ones that did received an average claim payoff of $112,964. If you own a home you might want to think about flood insurance. It’s cheap and it only takes one storm to ruin your home and your life.

If you are a female in Saudi Arabia it is a euphoric time! The country became the last on Earth to lift the ban against female drivers. Other Muslim countries allowed females to get behind the wheel and drive freely for years but Saudi Arabia stood solid having male only drivers. It’s about time these idiots got their head out of their asses and let women drive.

WHO OWNS YOUR FAVORITE RESTAURANT?