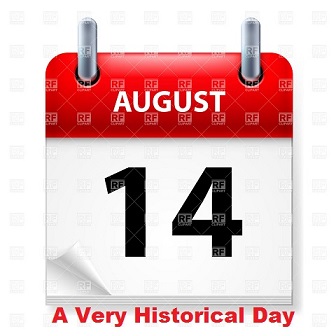 Today, August 14, is not just another day. It is a day that two very historical events took place exactly 10 years apart. While they were both different in scope, they both had an effect on the future of the people of the United States of America for generations to come and generations beyond 2019. Here is a piece written in 2015 by the director of the Franklin  D. Roosevelt Presidential Library and Museum,  Paul M. Sparrow, Director, FDR Library.

August 14th is a very significant day in the legacy of Franklin D. Roosevelt. Two of the most important and lasting achievements of his presidency occurred on this day – ten years apart. The Social Security Act was enacted on August 14th, 1935, and the official end of World War II occurred when the Japanese signed the terms of surrender in 1945. It is tragic that FDR did not live long enough to celebrate the Allied victory or to witness the enduring success of social security. Neither would have been possible without his vision and leadership. Perhaps no two events better illustrate the extraordinary scope of FDR’s accomplishments and the lasting impact he had on the United States and the world. Today 59 million people are direct beneficiaries of the Social Security Act, and Germany, Italy and Japan are free and prosperous democracies and important allies in the quest for universal human rights.

As the new director of the Franklin D. Roosevelt Presidential Library and Museum I have a special responsibility to insure the records and artifacts of his administration are preserved and protected for future generations. As part of the National Archives and Records Administration it is also our mission to make access to those records as easy as possible.

Our online virtual research room FRANKLIN provides direct access to more than 700,000 pages of historical documents and 2,500 photographs. But that is just the beginning. In the coming years we hope to dramatically increase the scope and depth of FRANKLIN to include a wider range of documents and photographs, audio of his major speeches and “Fireside Chats” and other multimedia content currently in the archives. To help a new generation understand and appreciate President Roosevelt’s accomplishments we will provide digital resources to teachers and use social media to make access easy.

As we recognize the 84th anniversary of the Social Security Act and the 74th anniversary of the end of World War II it is vitally important that we understand Franklin Roosevelt’s vision for a world in which the government provides its citizens protection from the ruin of poverty and the ravages of war. By August 14, 1935 the United Stated had been suffering from the great depression for more than five years. On the day it was finally enacted the president said this:

Sexual Sounding Names of cities and Towns in the U.S.