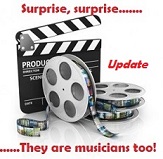 Art’s World – They are Musicians Too! Update

We originally did this a little over a year ago, but I have updated it and added a few more actors who were also musicians that many did not know about. This is special for me because of my love of music, my days in radio and my father being a musician with several big bands, plus his own band back in the days of the big band/swing era. It also prompted me to write a book and have it published titled “When Swing Was King” (available through Amazon and Barnes&Noble.com)

Gary Burghoff – While he has done a lot on Broadway, TV and movies, a mention of his name automatically brings the show M*A*S*H to mind and his character of Radar. But not many people know that he actually has been a drummer all his life and played in a group called The Relatives back in the 60’s (Lynda Carter later of Wonder Woman fame, was the band’s singer). He acted on Broadway, off Broadway and became a household name with M*A*S*H, but the drums were never far away and Gary would play every chance he got. Check out this video of  him playing drums on a musical segment in the M*A*S*H series. What makes it even more amazing is that he has had a deformed left hand since his birth but can still play. https://www.bing.com/videos/search?q=gary+burghoff+playing+drums+video&view=detail&mid=2951E5841F0107AADA3B2951E5841F0107AADA3B&FORM=VIRE

Jack Lemmon – We all know Jack Lemmon from classic movies like “Some Like it Hot, “The Apartment” and so many more. His pinpoint timing and reactions on screen made every Lemmon scene special. But he was also a very gifted piano player and even recorded an album back in 1959 titled “A Twist of Lemmon” featuring him on piano and some vocals (I still have that LP). He could do jazz, ballads and just about any style. The amazing thing is he could not read a note of music. If you want to see the musical talents of Jack Lemmon  go here:  https://www.bing.com/videos/search?q=Jack+lemmon+playing+piano+vodeos&&view=detail&mid=61234063C4561FEE28F161234063C4561FEE28F1&&FORM=VRDGAR&ru=%2Fvideos%2Fsearch%3Fq%3DJack%2Blemmon%2Bplaying%2Bpiano%2Bvodeos%26qpvt%3DJack%2Blemmon%2Bplaying%2Bpiano%2Bvodeos%26FORM%3DVDRE

Charlie Callas – A very funny standup comedian, Charlie Callas was a fixture in Las Vegas and became a big hit on TV. Aside from his Vegas gigs, he was a frequent guest of Johnny Carson, the Dean Martin roasts and many other variety and comedy shows. But music was always his first love. He played drums with a couple of the big bands at the end of the swing era. Charlie always had a flair for comedy and kept his fellow musicians laughing when they traveled. When the drum gigs became sparse, he turned to comedy, but never gave up his love of the drums. Here is Charlie Callas with a full symphony orchestra doing an amazing drum solo to the “Grand Canyon Suite”. https://www.bing.com/videos/search?q=Charlie+Callas+playing+drums+vodeos&qpvt=Charlie+Callas+playing+drums+vodeos&FORM=VDRE

Dustin Hoffman – Talk about an award winning career, Dustin Hoffman has done just about everything in films. “Tootsie”, “Midnight Cowboy”, “Rain Man”, “The Graduate” and on and on.  While his full range of acting talents have always been on display, his musical talent has remained in the background. But this amazing actor is also a very accomplished pianist and finally got to show off his musical talent in the movie, “Last Chance Harvey”. Check out these two  clips of Dustin Hoffman the pianist: https://www.bing.com/videos/search?q=Dustin+hoffman+playing+piano+vodeos&&view=detail&mid=2032178F7693658DAD2A2032178F7693658DAD2A&&FORM=VRDGAR&ru=%2Fvideos%2Fsearch%3Fq%3DDustin%2Bhoffman%2Bplaying%2Bpiano%2Bvodeos%26qpvt%3DDustin%2Bhoffman%2Bplaying%2Bpiano%2Bvodeos%26FORM%3DVDRE

Steve Martin – We all know Steve Martin as a brilliant comedian and an accomplished actor. His appearances over the years with Carson, Letterman, etc. were always highlights. His movies include hits like The Three Amigos, Roxanne, The Jerk and Father of the Bride. But he has been a banjo player almost his entire life and appeared at jazz festivals, played Carnegie Hall, won a Grammy, charted records,has had almost a dozen top selling albums and guested with a number of jazz, bluegrass and Dixieland bands, and also taught banjo over the years. Give a listen: https://www.bing.com/videos/search?q=Steve+Martin+banjo+videos&view=detail&mid=B16C50D8E9704E49A29EB16C50D8E9704E49A29E&FORM=VIRE

Clint Eastwood – The first thing that comes to mind is TV’s Rawhide, spaghetti westerns, “Dirty Harry” and action films. In his later years he became known also as a top director of hit films like “Million Dollar Baby”, “Bridges of Madison County”, “Space Cowboys” and many more. Then there are all the awards he has won over the years, but there is one more part of his life that has pretty much stayed in the background. That is his proficiency as a musician, song writer and arranger. He has written and arranged the music for many of his films and others. He is an extremely talented pianist and can really jazz it up. For an example of the Clint Eastwood musical talents check this out; https://www.bing.com/videos/search?q=Clint+Eastwood+playing+piano+videos&docid=608033727684216289&mid=07809C0BF56730D57A5507809C0BF56730D57A55&view=detail&FORM=VIRE

Bob Crane – When his name pops up the first thing that comes to mind is the TV show “Hogan’s Heroes” which was on the air from 1965 to 1971. You might also be aware of his sexual hi jinx in his private life and his murder in 1978 that wasn’t solved until 1992. But not many know that Bob Crane was an accomplished drummer. He began playing when he was eleven years old, played in the school band and also played with the Connecticut Symphony Orchestra. His music side got sidetracked after he got into TV and Hogan’s Heroes. After that he guested on a number of other top shows and also did  little drumming with various Dixieland groups until his untimely death. He is also p[laying drums in the opening theme of Hogan’s Heroes. Check out this video of Bob Crane the drummer: https://www.bing.com/videos/search?q=Bob+Crane+Playing+Drums&&view=detail&mid=522BE5CFC0BF139B89EF522BE5CFC0BF139B89EF&&FORM=VRDGAR&ru=%2Fvideos%2Fsearch%3Fq%3DBob%2BCrane%2BPlaying%2BDrums%26FORM%3DVDMHRS

I hope you enjoyed this edition of “Art’s World” and a look at the musical side of these actors. They are just a few of a long list of other actors and actresses who sing, play musical instruments and do it extremely well. In the meantime enjoy this and feel free to share it with friends and we welcome your feedback and comments. Enjoy your day with a little music added.