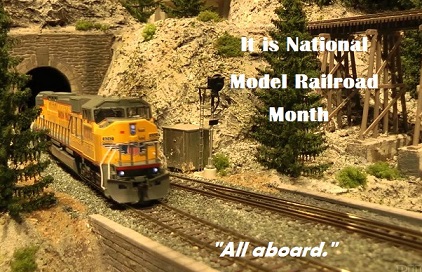 This month is the perfect time to celebrate our love for model trains. What is more a part of Christmas besides Santa Claus, the tree, lights, decorations and all kinds of good times with family and friends? Model trains of course. Whether you are eight or eighty, model trains still have a big fascination for every age. Just go to a model railroad show and you will see men, women and children of all ages “oohing and aahing” over the model train layouts on display and the wide variety of model railroading merchandise available to purchase.

For me personally trains, both model and real, have always been a fascination for me. When I was a small child my grandfather nicknamed me “Choo Choo”. Until about 25 years ago I was an avid model railroad guy. It all got started  when I got my very first Lionel train set when I was 6 years old. From that point on and over the years it got built into a six train layout that became so big it took up one whole room in the house and remained up the entire year! With all of the scenery, lighting, accessories, figures, moving parts it really took on a life of it’s own over all the years I had it. It really became a special thrill and my memories from back then still reside inside me.

There are model train shows just about everywhere, including one every December at the Florida State Fairgrounds that I never miss. The layouts are mind blowing and incorporate just about everything and anything. There are plenty of model railroad  train parts, collectibles, magazines, books, scenery and accessories for sale at these shows. There are layouts of every kind, every style and every size. It is amazing what some people can put together and make it so realistic.

Model trains come in all size and gauges and some enthusiasts even run them outside their homes throughout their yard. The most popular gauges are the HO, but there is a lot to choose from. You can even get a model train set in an attache case (check out the photo). That is “Z” gauge, but it is extremely detailed and you can take this where ever you go. There are also layouts for those that want to put them under a glass top coffee table. There is no limit any longer when it comes to where model trains are set up in the home or outside the home.

In addition to us mere mortals who love and collect model trains, there are a lot of celebrities who are also huge model train fans with big layouts. Tom Brokaw, Eric Clapton, Elton John, Tom Hanks, Phil Collins, Johnny Cash, Michael Jordan and others. Among the biggest layouts were Frank Sinatra’s who had an entire cottage built just to house his collection and layout. Collins postponed recording a new album because he was too busy working on a huge model train layout in his home. Today Rod Stewart, as you can see in the picture above has one of the largest, exact to scale layouts in model railroading. Matter of fact it is a known story that Stewart would take model trains with him on tour and set them up in his hotel suite to enjoy after a show. We might also add singer Neil Young is not only a model train buff, but also part owner of  the iconic Lionel Trains company.

Here is a website you must check out for Miniatur Wunderland…..https://www.miniatur-wunderland.com  This is the largest model train display in the world and you will not believe your eyes. Not only are there trains and different countries around the world represented in this display, but a full fledged model airport as well. The detail in every single part of this massive layout is impeccable. To me this is the greatest model train display to ever be assembled. Too bad it is in Hamburg, Germany as that is just a bit too far to travel. But do check it out.

With Christmas just over a month away I know some of you are still avid model train players and will have the train sets up for the holidays for both yourself and the kids if you don’t already. So “All aboard!” and let’s celebrate National Model Train Month. Happy railroading to everyone!