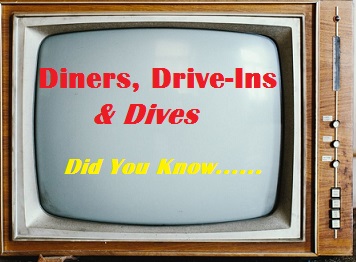 Last week I gave you some fun facts about one of the longest running shows on the Food Network, “Chopped”. As promised, this week we have some fun facts about another long running and popular show, “Diners, Drive Ins and Dives”. Hosted by Guy Fieri, the show has been on since 2006 and visited more than 1,000 places in that time frame.

There is a lot more that goes into making this show a hit and we will post the link so you can see everything that takes place to make this show a success. The research and planning process take months, but once it’s time to shoot the show, the crew hits the road and films nonstop. Executive Producer David Page says that they usually shoot seven restaurants in every city that they visit. Needless to say this is one very busy crew and host.

For more go to: https://www.delish.com/restaurants/g33388878/diners-drive-ins-and-dives-restaurant-rules/?slide=34 Now, enjoy the show, we sure do.