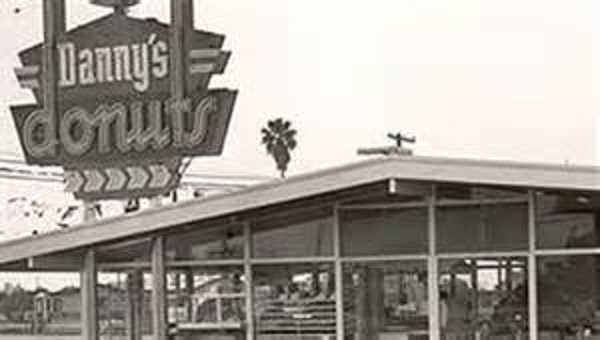 As we prepare for our 25th Annual NightMoves Adult Awards Show it is amazing to think we have been around since 1989, twenty eight years. It got me to thinking about how long some businesses have been here since the 50’s, 60’s and 70’s, gone through name changes, ownership changes and grown. With that in mind and taking in the years between the 1950’s and 1970’s here are some of those businesses that are still going strong today. 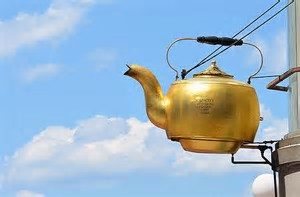 1950 –Open Kettle Coffee Shop in Quincy, Mass., which became better known as Dunkin’ Donuts. Dunkin Donuts, after the name change from Open Kettle in the mid 50’s began to franchise and in the coming decades the company grew bigger and bigger becoming one of the largest coffee and donut shops in the country.  Several years ago they expanded to the fancier types of coffee and also sandwiches to a more demanding public and it has become a big boon to the overall business. Today there are more than 12,000 Dunkin’s in all types of locations from free standing stores to malls, gas station/convenience stores and more in all 50 states and 36 different countries around the world. Ross Department Stores with their “dress for less” slogan began in San Bruno, California. Today there are 1,255 stores in 33 states, but none in New Jersey, New York or New England. When Ross began the skeptics felt that off price retail for women would not work and they would be done in a year or two. Today in its 67th year, Ross is the second-largest off-price retailer in the USA, behind TJX Companies. So much for the skeptics! 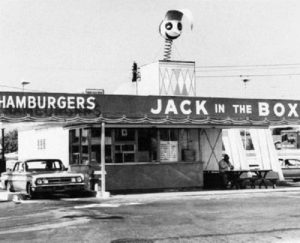 1951 – Jack in the Box began in San Diego, California as a drive through type restaurant. What set them apart from other drive ins at the time was they were the first restaurant to use the two way intercom system to order your food as you drove through. This new convenience helped the hamburger restaurant’s popularity increase and they began to expand eastward, but that was stopped and dropped plans for the eastern U.S. Still, it has grown into a 2,200 unit franchise mostly in the western, southwestern part of the country. Today there are several units in Indianapolis and a couple in Ohio. They also operate a few food trucks selling the brand as well. The company, despite its popularity, has no plans to expand outside the U.S.  Circle K Convenience Stores began in El Paso, Texas and is now in most of the 50 states, all Canadian provinces and a number of European countries like Denmark, Sweden, Norway, Estonia, Latvia, Lithuania, Russia, Poland and Ireland as well as Asia and Latin America. Many of the U.S. locations also have gas pumps with Circle K using various gasoline brands like Mobil, Shell, Marathon, BP and others. All of the stores carry a full line of to go foods, drinks and sandwiches and where it is allowed by city or county law, they also sell beer and wine. The current number of Circle K units is around 4,000 worldwide with still more being planned for 2018 and beyond. 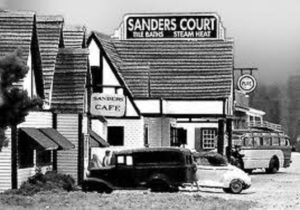 1952 – Kentucky Fried Chicken’s first franchise opens in Salt Lake City, Utah. It began as Sanders Court & Café in Corbin, Ky back in the 1930’s. Once the brand took off and with “Col Sanders” doing the commercials,  KFC which it later became, started franchising all over the country. KFC was also one of the first fast food places to expand internationally. Today KFC has over 4,500 units in the U.S. and over 18,000 units in 118 countries and territories around the world. Holiday Inn first began in Memphis, TN. by home builder Kemmons Wilson as the “Holiday Inn Hotel Courts”, a 12 unit drive in motel. Then three more were added over the next couple of years and simply became Holiday Inn. They grew in size, style and amenities the units offered. They were also the first hotel to pioneer franchising which began in 1957. Today, based out of Atlanta, Georgia it is a worldwide conglomerate of more than 2,700 hotels under various brand names besides Holiday Inn and Holiday Inn Express. Under the Holiday Inn name and other brands they expect to open another 300 hotels by 2019. 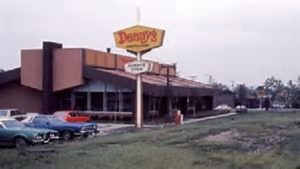 1953 – Denny’s Restaurants actually began as Danny’s Donuts in California before the permanent name change. It went through a couple of names changes to avoid legal problems before settling on Denny’s. It also went to a 24 hour format and with a full menu of lunch, dinner and breakfast. Today there are more than 1,600 Denny’s all across the U.S, plus units in Canada, Japan, El Salvador, New Zealand and many other countries. About 40 Denny’s restaurants employ the “diner” concept, using modular buildings that resemble classic 1950’s diners.  Playboy Magazine was based out of Chicago and the first issue was put together and produced out of Hugh Hefner’s apartment with a borrowed $1000. The magazine cost 50 cents and came out in December 1953 and featured the nude centerfold of Marilyn Monroe. Originally it was going to be called Stag Party, but there was a magazine already called Stag, so to avoid legal problems the Playboy name was chosen and the rest, as they say, is history. 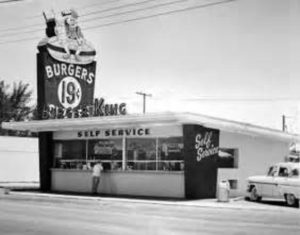 1954 – Begun as InstaBurger King in Jacksonville, Fl. financial problems had a couple of Miami franchise owners take it over and rename it Burger King. Today the “Home of the Whopper” has more than 15,000 locations worldwide. They also specialize in certain menu items that are indicative of the countries they are in. Burger King’s Australian franchise “Hungry Jack’s” is the only franchise to operate under a different name, due to a trademark dispute and a series of legal cases between the two. Ramada Inns began in Flagstaff, Arizona with one 60 unit hotel on the famed Route 66. One of the original owners was Del Webb, who owned the new York Yankees at the time. The concept was to have clean, appealing units, top service and affordable [prices. It’s popularity grew and by the 70’s was the second largest hotel chain in the U.S. besides Holiday Inn. Today the Ramada chain is wholly owned by the Wyndham Corporation. Currently, there more than 3,000 hotels of various styles, brand names and amenities worldwide. 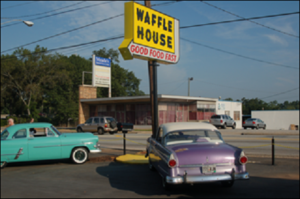 1955 – Waffle House began in Avondale Estates, Georgia with a 16 item menu. With no place in the area open late at night they decided to stay open 24 hours and specializing in waffles. Soon, there was much more offered than just breakfast waffles including steaks, eggs, omelets, sandwiches and much more. Today there are more than 2,100 locations in 25 states that seemingly go nonstop 365 days a year. Waffle House even produced their own recordings that are available on CDs. The chain serves more than 2 billion cups of coffee a day and they also sell more T-Bone steaks than any other restaurant in the country.  Aaron’s Rents began in Atlanta, Georgia. With the big move to the suburbs taking place all over the country in the 50’s, this company specialized in renting and leasing household furniture to new home buyers. Today, there are almost 1,900 Aaron’s in 48 of the 50 states and Canada providing just about everything but the kitchen sink for the home. In addition they are also big time auto racing sponsors with both NASCAR and Michael Waltrip and the NHRA as well.

There you have the short version background stories with these companies that began basically bare boned but made a hit with the general public over the years. You also now have some good trivia that you can use to show off your knowledge! In our next segment of “Art’s World” we’ll take a look at the rest of the 1950’s businesses that have made their mark here and around the globe. I guarantee there will be a few surprises in that group.

Art’s World – Want to Test Sex Toys for a Living?