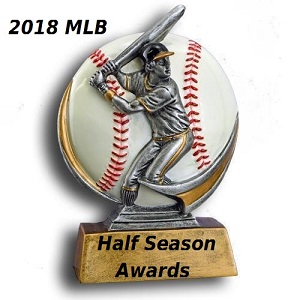 When I am not busy doing my adult industry writings, reviews, etc.for NightMoves and AAN, my big passion is baseball and has been since I was seven years old and went to my first ever game to see the Brooklyn Dodgers and Boston Braves at Ebbetts Field. I played in high school, I have coached in Little League, had the pleasure of working for a couple of ML teams over the years and written a book on this great game and I belong to a baseball fantasy league. I am a devout fan of the game and my hometown team, the Tampa Bay Rays. All that being said here are my award picks for the first half of the 2018 MLB season.

A.L. MVP – No, not Mike Trout, Aaron Judge or Mookie Betts which would seem to be the obvious choice. Instead my pick is for 3B Jose Ramirez of the Cleveland Indians. Why? Just look at his line for the first half  86 hits, 44  for extra bases, including 23 home runs and 52 RBI, BA of .281, 13 SB, OBP .395, SLG % .598, OPS .993. Even with the other players like Lindor, Encrnacion, Kipnis, Kluber, Carrasco, etc. the Indians would not be leading the AL Central without Ramirez. To me with those numbers and his other intangibles, he is the MVP of the team.

A.L. Rookie of the Year – Nope, no Shonei Otani, I have to go with the Yankees 21 year old infielder Greyber Torres. This kid has been everything that he was advertised to be and being surrounded by the likes of Gardner, Sabathia, Stanton and Judge doesn’t hurt. His line thus far is impressive with a .284 BA, 14 home runs, 38 RBI, .473 SLG %, OBP .341, OPS .878 and his fielding has been remarkable. However, before this season ends you may be hearing the name Jake Bauers of the Tampa Bay Rays a lot for the 2018 ROY.

A.L. Cy Young Award – For the first half there are five that are all very deserving. There is Chris Sale of the Red Sox, Gerrit Cole and Justin Verlander of the Astros, Cory Kluber of the Indians and Blake Snell of the Rays. But that could change in the second half if David Price continues pitch as he has recently, he could add some more wood to the fire. It is shaping up to be a very competitive award for this year. However, for this first half, my pick is Gerrit Cole of the Astros. He is 9-1, .256 ERA, 146 K’s in 105 IP, WHIP 0.899 which are pretty insane numbers considering the power bats in the A.L.

AL Manager of the Year – Nope, not Joey Cora or Aaron Boone, that’s way too easy. My pick is for Scott Servais of the Seattle Mariners. Beset with injuries, using minor leaguers to fill in, making trades to get the right combo and the big suspension of star Robinson Cano, should have doomed this team. But Servais has kept them all together and they are giving the Astros all they can handle in the AL West. I would also say that Kevin Cash of the Rays deserves consideration with all he has had to deal with. Losing half his rotation, other injuries, employing a “bullpen day”, using as many as 15 rookies thus far on the roster, win streaks and bad losing streaks and still be right around .500 in the tough AL East, he deserves to be a MOY candidate.

NL MVP – This really a tough one for the first half as there are several worthy candidates. But for me it comes down to just one person, 1B Freddie Freeman of the Atlanta Braves. One of the surprise teams in MLB thus far the Braves basically went into a rebuild but with a true veteran like Freeman, as well as Nick Markakis, this team has surpassed anything anyone expected. Freeman’s leadership on and off the field can’t be measured in numbers, but here they are.  He has a BA of.315, 15 HR, 54 RBI, OBP .408, OPS .956 and SLG % .560. With those numbers and what he brings to the club in general he is definitely the MVP.

N.L. Rookie of the Year – Again there are several worthy candidates pitcher Jack Flaherty of the Cardinals and OF Ronald Acuna Jr. of the Braves just to name two. For me it comes down to a player who no one saw coming when the season began, and certainly not in the way he has. My pick is for 19 year old OF Juan Soto of the Washington Nationals. To be that age, come into the ML and make it look easy is not something you will see every day. When you can take away headlines from star teammate Bryce Harper, you are special. In just over 100 ML AB’s he is hitting .324, 6 HR, 18 RBI, 36 hits, OBP .434, SLG % .574, OPS 1.008. For a team that has been mired in a bad funk, this kid is the real deal and what the Nationals need.

N.L. Cy Young Award – This is the one half season award that is a no brainer. Unfortunately he is on a team that has more problems than the White House. My pick is for Jacob deGrom of the New York Mets. Fact is he is one of the best in the entire game regardless of which league. The big question is will he finish the season as a Met. As for the numbers his record may only be 5-3, due to an injury that sidelined him for a bit and a team with little support but the rest, a 1.26 ERA, the best in MLB, 126 K’s in 101 IP and a WHIP of 1.007. With a better team his numbers would be even more outstanding. He is hands down, my pick for this award.

N.L. Manager of the Year – This is a tough one as there are several who are very deserving, But after looking at everything my pick is for Tory Lovullo manager of the Arizona Diamondbacks. The former Red Sox bench coach in his first year as a ML manager has done a terrific job. Dealing with injuries to key players, a slow start by stars like Paul Goldschmidt this team is currently in 1st place in the NL West. Most picked them to be contenders, but the sentiment was the Dodgers were the front runners. So far Lovullo and his D-Backs have proven to be a solid force to be reckoned with and Lovullo gets my vote for the first half MOY.

There you have my selections for the awards for the first half of this 2018 ML season that has been filled with excitement, surprises, and disappointments. What will the second half bring? How many of these award predictions will still be in contention or win after the season ends. Guess we’ll just have to wait until November to find out. In the meantime…………………Play ball!