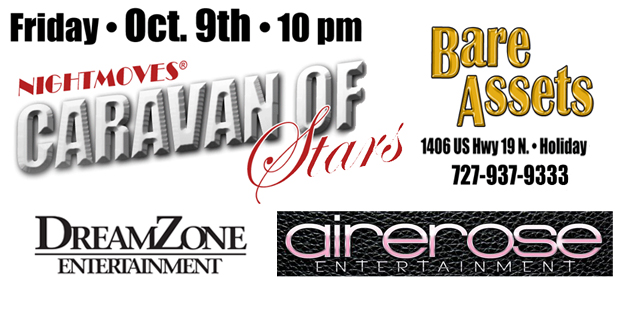 Those who attend the star-studded evening will receive items from a swag-bag collection of items, including DVDs, T-shirts, promotional items, and more. The event is open to the public.

“Airerose/DreamZone have supported our show for the past few years, and their support means the world to us!” says Paul Allen, Publisher and Founder of NightMoves®. “We are super excited to be giving away copies of their latest movies to people who attend our ‘Star Caravan’ at Bare Assets. Airerose and DreamZone will make this one of the most exciting parties we do all weekend long!”

Promotional DVDs from Airerose releases All Access Carter Cruise, All Access Abella Danger, Kayden Cross’ Casting Couch, Pure Bush, and its newest release, Buttslammers, will be provided to those who attend. DreamZone will be providing copies of Sleeping with Danger as its promotional offering.

“It’s great to be part of the NightMoves® Awards again this year,” said Adam H. of Airerose. “They have always been huge supporters of DreamZone and Airerose. Congratulations to all the nominees, and thanks for the support.”

The NightMoves® Awards are more than a one-night awards show; it is a fun-filled, exciting, ultra-busy weekend that includes “Star Caravan” events at local nightclubs and multiple radio appearances. In addition, fans will be able to meet and interact with performers at the NightMoves® Fan Fest, where stars sign autographs and take photos. The weekend culminates in the 23rd Annual Awards Show, held Sunday, October 11 at the Tampa Gold Club.

I CAN'T WAIT TILL SUNDAY NIGHT!