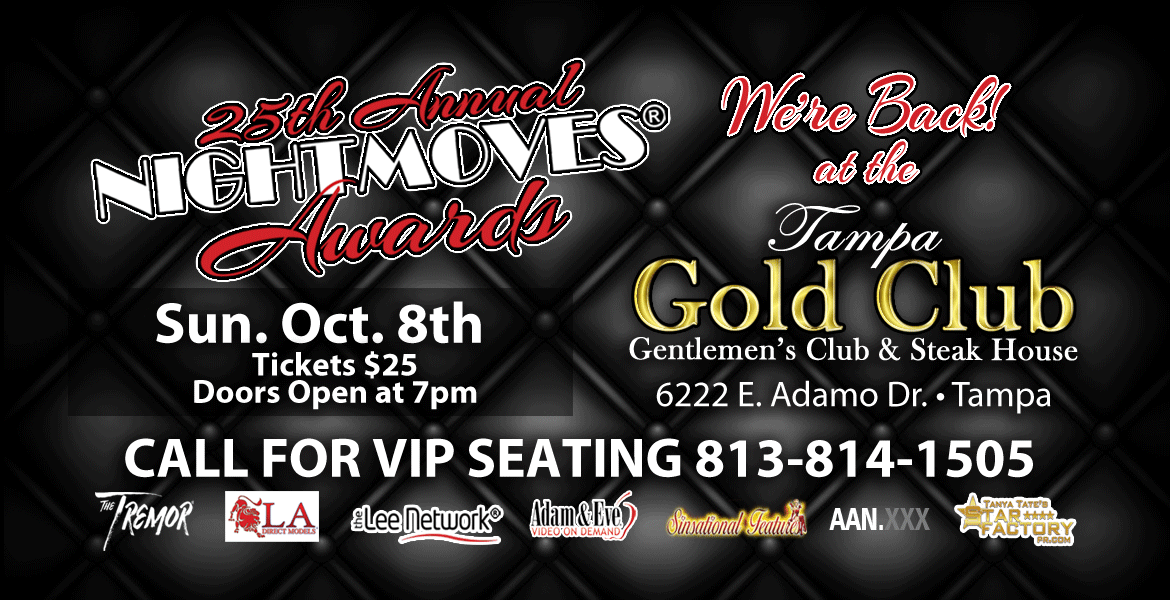 See the complete list of stars coming to Tampa

TAMPA, FL (SEPTEMBER 5, 2017) – The 25th Annual NightMoves Awards will take place at the Tampa Gold Club, 6222 East Adamo Drive in Tampa, Florida. Doors will open to the public at 7:00pm on Sunday evening October 8th.  The move marks a return to the club that previously hosted the awards show in 2013-15.

“We felt with this being our 25th Annual Awards Show we needed a location that could handle our crowd. The Tampa Gold Club is not only huge, it has two stages, a fantastic light & sound system and there isn’t a bad seat in the house! We are super excited to be back at TGC and this year’s show will be nothing short of amazing”, said Paul Allen owner of Nightmoves Magazine.

NightMoves is also proud to announce that along with performances from the top adult stars and feature entertainers in the world (including Natasha Nova, Prinzzess, Penny Poison & Adriana Chechik) Jeff Vitolo and the Quarter Mile Rebels Band will be performing live at the Awards Show. Jeff Vitolo is a legend in the Tampa Bay music world and has been performing for the past 30 years. Along with recording 13 albums and playing music from coast-to-coast, Jeff also won the NightMoves “Best Club DJ Award” in 2007, 2009, 2010, 2011 and 2012! The Quarter Mile Rebels play a mixture of rock-a-billy, blues and good old fashioned rock n’ roll! Award Show tickets are only $25 and reserved seats are available. Please contact Paul Allen at 813-814-1505 or email at PaulAllen@NightMovesUSA.com for details.

The NightMoves® Awards, started in 1993, is the third oldest and continuously running adult awards show in the United States, trailing only the AVN Awards and the XRCO Awards. To be considered eligible, a movie has to have been released between June 16, 2016 and June 15, 2017. Individual Awards are also based on this same time frame except for those in the “New Starlet” category, whose performances between January 1, 2016 and June 15, 2017 qualify.

Fans and industry people can log their votes for their favorite adult performers, directors, films, and feature dancers at: http://bit.ly/VoteNightMoves17.

The deadline for votes is 11:59pm, Friday, September 15. There is only vote allowed per IP address; a legal ballot must have votes in at least 6 categories.

The NightMoves® Awards were the first to allow fans to select their winners, making it the original Fan-Based Awards, as well as the first awards show to allow on-line voting. In addition to the Fan Awards, the show presents Editor’s Choice awards, based on reviews of DVDs in which nominated performers have appeared.

For more information on The NightMoves® Awards, visit

It can also be followed on Twitter at http://twitter.com/NightMovesShow

For Additional Information on The NightMoves® Awards, Including Sponsorship Opportunities, Contact:

A press release issued by

Nominated: 2011 Xbiz Award for Marketing Campaign of the Year

If for some reason your email is returned use our alternative email thestarfactory@gmail.com

The Lastest News From ACE

Ugly Sweater Party at The Whiskey