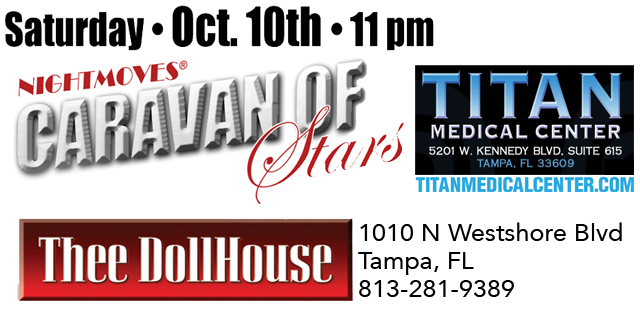 TAMPA, FL (September 29, 2015) – The 23rd Annual NightMoves® Caravan of Stars is happy to announce its sponsorship by Titan Medical Center. The Tampa-based med-spa will act as the official host for the Saturday Caravan, held at Thee Dollhouse October 10.

“We’re thrilled to return to Thee Dollhouse for our final Star Caravan of the weekend, and delighted with Titan Medical’s sponsorship of the evening!” says Tracy Allen, Editor of NightMoves® Magazine and Co-Producer of the NightMoves® Awards. “Thee Dollhouse is one of the classiest clubs in Tampa, and we know it will be jam-packed! The energy of Thee Dollhouse is always amazing, and it’s going to be even more high-energy with all of the beautiful girls we’ll be bringing!”

Titan Medical Center provides an enhanced quality of life in a personalized setting for all of its patients. Utilizing the latest, cutting-edge scientific studies and diagnostic laboratory testing to achieve optimal levels of health for each and every one of its patients, Titan Medical Center provides first-class patient care and specializes in bio-identical hormone therapy, nutrient supplementation therapies, organ detox / cleanses, libido enhancers, and more. For more information, visit http://www.titanmedicalcenter.com.

Those who attend the star-studded evening will receive items from NightMoves®’ swag-bag collection of items, including DVDs, T-shirts, promotional items, and more. In addition, Titan Medical will be offering a $200 gift certificate at the Saturday Caravan, along with goodie bags and other promotional items. The event is open to the public.

The Saturday night Caravan of Stars will be held at Thee Dollhouse, 1010 N Westshore Blvd, Tampa, FL 33607, from 11pm – 2am. For more information, visit https://nightmovesonline.com/nightmoves-awards-show/nightmoves-awards-weekend-schedule/. or contact the club directly at 813.281.9389.

The NightMoves® Awards are more than a one-night awards show; it is a fun-filled, exciting, ultra-busy weekend that includes “Star Caravan” events at local nightclubs and multiple radio appearances. In addition, fans will be able to meet and interact with performers at the NightMoves® Fan Fest, where stars sign autographs and take photos. The weekend culminates in the 23rd Annual Awards Show, held Sunday, October 11 at the Tampa Gold Club.

Caravan of Stars at 2001 Odyssey