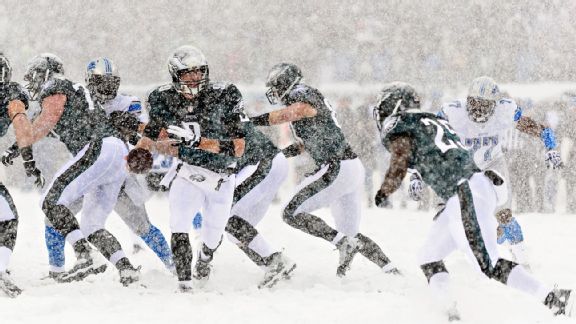 In the college football world, bowl game matchups were set over the weekend and #1 Florida State will play #2 Auburn for the national title on January 6 in Pasadena, California. The Seminoles concluded their undefeated regular season by trouncing Duke in the ACC Championship game and Auburn beat Missouri in the SEC title game to set up the matchup. Michigan State upset previously unbeaten Ohio State to put Auburn into the game. It was the first game the Buckeyes lost under head coach Urban Meyer in two years. Here in Tampa Bay, The Outback Bowl will have LSU playing Iowa on New Year’s Day.

Other BCS bowl games include Michigan State -v- Stanford in the Rose Bowl, Alabama -v- Oklahoma in the Sugar Bowl, Oklahoma State -v- Missouri in the Cotton, Clemson -v- Ohio State in the Orange Bowl and Baylor -v- UCF in the Fiesta Bowl. The Knights will have their work cut out for them as Baylor is a scoring machine!

Yesterday was one hell of a day in the NFL. Numerous games were played in snowstorms and the league set a record with 90 touchdowns scored! The New England Patriots scored twice in the last 1:01 to squeeze out a victory over Cleveland … five touchdowns were scored in the last 125 seconds and the Baltimore Ravens ended up beating the Minnesota Vikings …  Philadelphia Eagle running back LeSean McCoy set a franchise record with 217 rushing yards leading his team to a victory over Detroit and Denver Bronco Matt Prater kicked the longest field goal in history when he connected on a 64 yard kick! Oh yeah, The Tampa Bay Bucs beat the Buffalo Bills 27-6.

In other sports news …. the LA Lakers welcomed back Kobe Bryant as he played his first game of the season scoring 9 points and grabbing 8 rebounds. Despite his return, the Lakers lost to Toronto 106-94 … Zach Johnson defeated Tiger Woods in a playoff winning the Northwestern Mutual World Challenge in Thousand Oaks, California and UCLA defeated Florida State 1-0 winning the ladies NCAA soccer title.

ASSHOLE OF THE DAY!