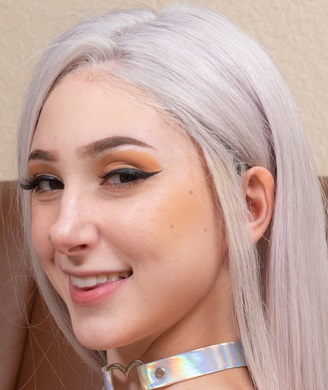 This week we have the pleasure of re-introducing you to a very sexy, all natural, big busted blonde from South Florida. She has been in the business since mid 2019 and has made some very serious strides upwards in the industry. While things were put on hold because of the pandemic this young lady continued her rise in the industry. She is now a nominee for Best New Starlet in our upcoming 29th Annual NightMoves Awards to be announced Oct. 10. The link where you can vote for her will be at the end of this feature. Her name is Skylar Vox.

She was born on January 9, 2000 in South Florida. Not all that much is known about her childhood and school years. However, it is known that while she was in s both middle school and then high school she was bullied quite a bit. Why? Because even at a very young age her breasts were much bigger than other girls her age and she got teased, mocked and bullied a lot.

So Skylar dropped out of high school, but did forge ahead and got her GED.  She did admit to losing her virginity in high school and having sex with several different guys. Dropping out and some family issues derailed her original plan of wanting to go on to college and become a nurse.

At first she was going under the name Dylan Vox, but changed to Skylar after seeing someone else in adult using the name Dylan. It was very clear right from the start that this big busted all natural blonde had all the goods plus the talent. Once she got the first couple scenes under her belt she knew this was where she really did belong.

She is a definite bright light in the industry. Now that labels are back shooting scenes, you can be sure you will be seeing a lot more of this very sexy brown eyed blonde with the 32DD rack. She has everything needed to become a star in 2021.  As we said above she is a nominee for Best New Starlet and you can vote for her and all your other favorites by going to: https://nightmovesonline.com/vote-now/ and do it today. I am very pleased to present SkylarVox as my “Girl of the Week” here on AAN.

Girl of the Week – Kay Lovely