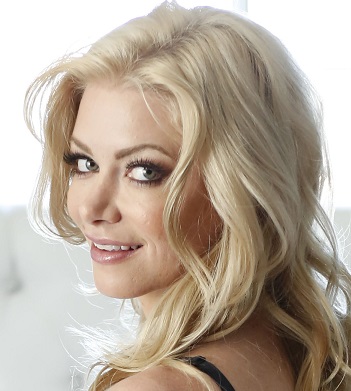 This week we bring back a young lady who is fast becoming a triple threat in the industry. She has been on the scene a few years and is a lot more than just a sexy blonde performer. She has also become a very gifted film director as well. Like everyone else, the pandemic put a lot of things on hold for her in the industry. But now that productions are getting back to normal, she is returning with a vengeance. Her name is Serene Siren.

We do know that she was born on May 30, 1989, but Serene has kept where she was born and grew up a big secret. However, it is known, through her that she grew up in a small country town. She also says that she was exceptional as a student and athlete throughout her school years.

Serene actually liked going to school and learning and was a straight A student, honor roll, etc. Athletically she was also a champion gymnast and had ideas of  taking those skills to the next level.  She suffered a few injuries along the way and the rehabbing got to be too much, so she gave it up.

Always a go getter, Serene worked two jobs while also doing her studies, putting in 40 hours a week with her gymnastics and was her friends designated driver when it came to parties. She lost her virginity at 15 to a boy who was also a virgin. She said that her sister had a reputation for giving good head so she decided she had to do it better.

Since coming back Serene has been very busy doing scenes for a lot of companies like Wicked Pictures, Digital Sin, Girlfriends Films, Sweetheart Video, Nubile, Hustler Video, plus web scenes for a number of companies. While she had done guys earlier on, all her films now are strictly girl/girl and she is an exceptional talent as a performer and actress.

In addition to her roles as a performer, Serene has also moved to the director’s chair and directed several Girlfriends Films productions. If you have not seen her in action here are a few suggestions, “Sex & Lies” for Wicked Pictures, “Confessions of a Sinful Nun 2” for Sweetheart,”Prison Heat” for Sweetheart Video, “Twisted Passions 28” for  Girlfriends Films and a lot more.

Actress, performer, director, content creator, writer, she can do it all. Now with the industry coming back you can be sure this young lady, with a slew of new releases, will be front and center. We look forward to many new and exciting things from her in the coming months and into the future. I am very pleased to have Serene Siren as my “Girl of the Week” here on AAN.

Girl of the Week – Kit Mercer