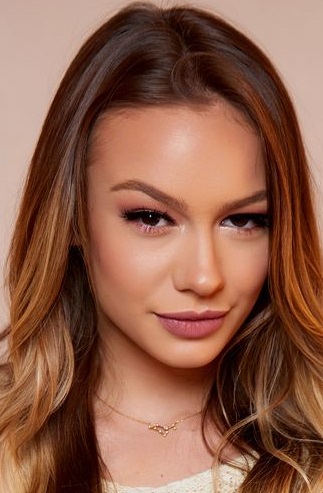 This week we are re-introducing you to another of adult’s new, exciting faces. This young lady has been in the business less than two years and wasted no time in gaining a lot of popularity. Then the pandemic hit and everything slowed down. But now she is back and going stronger than ever. To top it off she is also from right here in the Tampa Bay area.Her name is Naomi Swann.

A brown eyed beauty, Naomi was born on August 18, 1999 in St. Petersburg, Florida. It is where she grew up and went to school. She was very active in and out of school and interested in dance growing up. She competitively danced in different styles from ballet, to hip-hop, and acrobatics.

After school was finished Naomi was working as a waitress at a local Wing House restaurant when she befriended a coworker who was familiar with the fetish scene. She would help Naomi get her start in adult, shooting POV and fetish clips for Clips4Sale and even becoming a brand ambassador for the site.

Her foot fetish clips became especially popular with her fans. It was then that. Naomi realized this could be a big opportunity for her. In February 2019 Naomi made her way into the adult film industry. Since then this sexy babe with an all  natural body has continued to grow as a film performer.

The big break came when she was spotted by Greg Lansky and was immediately put to the test for his Blacked, Tushy and Vixen lines and Naomi did not disappoint. Her scenes proved to be an explosive start and her bookings for the year filled up fast. Naomi quickly gained a reputation as a pro and enthusiastic performer.

It is always a great feeling when another local girl from our area makes it. This stunning beauty is the latest in a long line of Tampa Bay ladies to make their mark in adult. We see a big bright future, award nominations and starring roles ahead for her in the coming months and year. I am very pleased to introduce Naomi Swann as my “Girl of the Week” here on AAN.