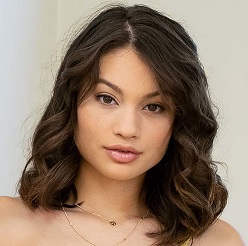 Girl of the Week – Liv Wild

Our sexy female this week is a relative newcomer to adult films. However, in the short time she has been on the scene she has made quite an impact. Her last name certainly describes her approach to sex and it has served her well with some scorching scenes. So come and meet Liv Wild.

Liv was born on June 17, 1998 in Panama City, Panama and is of Latin descent. While not much is known about her early years, we do know, from her own words, that she was a late bloomer, losing her virginity when she was 18. After school finished she worked at a number of different jobs.

She was working as an intern for a wildlife preserve and also as a marine biologist. But Liv is a very independent young lady and didn’t like having a boss and working for minimum wage. She wanted to be her own boss. So when an agent contacted her about getting into the adult field she really gave some thought.

The fact is it took Liv almost a year to make the final decision and to jump into doing adult films. As for her family she was very up front with them and told them what she was going to do. They gave her their support wanting her to be safe and happy. So in late 2018 Liv Wild began her journey.

To this point she has shot scenes for companies like Penthouse, Evil Angel, Adam & Eve, Deeper, Erotica X and Hustler. She has done web scenes for mofos.com, amateurallore.com, wankz.com, realitykings.com, deeper.com,  and a number of others and the roles and scenes keep coming her way.

If you have not had the chance to see this spitfire in action and enjoy her many talents, we have a few suggestions for you. Check her out in “Teen Kittens” for Evil Angel, the new “Pure Desire 7” for Erotica X, “Cuckold’s Plight” for Deeper and the brand new sex comedy from Will Ryder and Adam & Eve  “Love Emergency”, she is terrific.

In the short time she has been on the scene not only has she displayed her super sexual talents, but also her natural acting chops as well. There are a lot of  big things ahead for this young lady that will make her an even bigger star. I am very pleased to have Liv Wild as my “Girl of the Week” here on AAN.

Girl of the Week – Sky Pierce

Girl of the Week – Nia Nacci