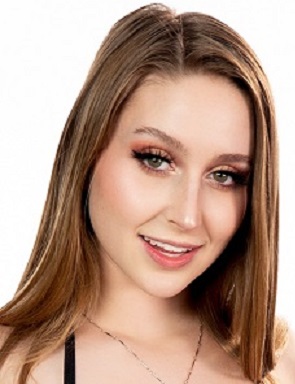 This week we introduce you to a former webcam model who began doing films in 2019. This green eyed beauty has it all going for her, and now that things are getting back into full swing in the industry, keep an eye on this talented young lady. Her name is Laney Grey.

She was born on October 29, 1998 in the picturesque ski town of Sun Valley, California. Laney spent her childhood and school years in the area. She lost her virginity to a boyfriend right after turning eighteen. When she graduated she didn’t want to be faced with a student loan for college so she didn’t go.

After school she was working at a local Starbucks and while it was okay, it really wasn’t what she wanted. So she began doing some modeling on Tumblr and began to get some notice. Then along came the idea of doing some web camming and that was the beginning of her entrance into the adult entertainment world.

The evolution for Laney was a natural. She says she was always a very sexual person even though waited until eighteen to have her first sexual experience. Since that time between camming, doing shows and now films she has had a chance to explore that sexuality. From what we have seen she definitely has it.

Since she broke into films she has performed for Girlfriends Fiolms, lethal Hardcore, new Sensations, Evil Angel, Bellesa Films, Hard X, Digital Sin and many others along with a variety of webcam titles. If you have not seen this young lady in action check her out in “Super Cute 12” for Hard X and “Secret Lesbian Diaries 10” for Girlfriends Films.

Now that the industry is getting back to a more normal schedule you can be sure you will be seeing a lot more of this talented, outgoing young lady. She has a bright and busy future ahead of her and I am very pleased to introduce you to Laney Grey, my “Girl of the Week” here on AAN.