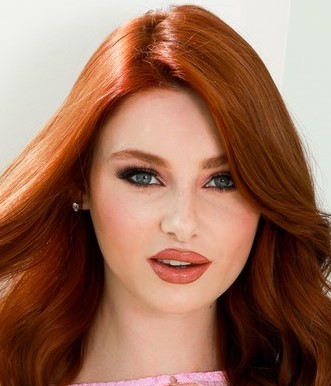 We re-introduce you to a ravishing redhead who has been in the business just about three years and has taken it by storm. She became an immediate hit with fans and last year was the winner of the Best New Starlet  at our 28th NightMoves Adult Awards show.  This year she is a nominee for Best Female Actress for our upcoming 30th NightMoves Adult Awards show. You can vote for her at the link that is at the end of this feature. Meet Lacy Lennon.

Lacy was born on January 23, 1997 and raised in North Carolina. She attended school there, but after graduation put some time in college studying business. She moved out to Reno, Nevada and spent a year working at the Bunny Ranch which she says really opened her up as a sexual person. It was at this point she began with the business doing a few things on her own and then sent off some photos and info. She was contacted and then signed on with Motley Models.

With her experience at the Bunny Ranch and doing some things of her own she was getting a feel for the industry and decided that it was time to move on to other things. She done some work as a webcam girl prior to her Reno move, so being in front of the camera was nothing new. Once she made the connection and signed on with Motley Models Lacy was ready to plunge full steam ahead into the industry and did her first adult scenes in late 2018.

Standing 5’ 4”, sporting an all natural body, that incredible red hair, blues eyes and a captivating style, Lacy was an immediate hit with fans. There is no question with all that beauty and a killer smile that Lacy has a very long future ahead of her in adult considering that in her short time she has done over 350 scenes. But aside from her talents as an adult performer this beauty has another great talent as a singer with an incredible voice that will blow you away!

Lacy joins a growing list of sparkling, talented redheads in the industry and they are all something special. I am married to a red head so trust me when I tell you they ARE special in many ways. The first time I saw Lacy perform I was very taken by her natural presence in front of the camera and how her beauty and the camera lens were a perfect marriage. Apparently thousands agreed as her fan base grew by leaps and bounds and that continues to this day

Since coming into the business, Lacy has worked for some top companies like Girlfriends Films, Lethal Hardcore, New Sensations, Girlsway, Wicked Pictures, Sweet Sinner, Digital Playground, Blacked.com, CherryPimps and others, with more to come. She has also done a wide variety of genres as well. In the past year she also became an exclusive contract performer with Girlfriends Films and has turned out some exciting lesbian themed titles.

The future continues to get bigger and brighter for the extremely talented, devoted and consummate pro. Her fan base continues to grow and there are no limits with this vivacious redhead can accomplish. She is a worthy nominee for Best Female Actress at our upcoming 30th NightMoves Adult Awards show and you can vote for her and all your favorites at: https://nightmovesonline.com/vote-now/ I am very pleased to present Lacy Lennon as my “Girl of the Week” here on AAN.