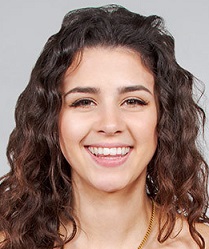 This week we are happy to introduce you to another of porn‘s new faces. She has been in the industry a short time, but even with the COVID pandemic slowing things down, she has been busy making a name for herself with her steamy scenes  both on the web and infilms that she has done since her debut that have everyone taking notice. Her name is Kylie Rocket.

So with that kind of blessing Kylie was off to see what would happen. She began , like many, a s a webcam model and was building success with that. Then she connected with Motley Models and reached an agreement with them to represent her. From there she began to do some film work.

With long brown hair, smoldering green eyes, a ready and friendly smile plus an all natural body, Kylie is a vision of youthful beauty. All of that and more comes across whether it’s on a live webcam sho0w or in a film scene. This you lady not only has all the physical tools, but the enthusiasm and talent as well.

In the summer of 2019 she made he debut in the Backroom Casting Couch shoot and it was a sizzling debut. From that point on, Ms. Rocket became a busy girl shooting a lot of content both on the web and films. She has done films for Girlfriends Films, Erotica X, Deeper, Evil Angel, Hustler, Digital Sin and many other labels.

If you haven’t had the chance to see this young lady in action, then we have a few suggestions for you. Check out the recent “Impulse” for Deeper, “ Coming of Age 7” for Erotica X, “Cheer Squad Sleepovers 35” for Girlfriends Films, “Sex Therapist 4” for Sweet Sinner and the brand new “Polyamory 5” for Erotica X. Guaranteed you will become an instant fan.

She is definitely a young lady to keep an eye on. Now that the industry is starting to come back you can be sure this sexy bombshell will be doing even more big time releases for your enjoyment. We see some really big things ahead in her career and are very glad she is part of our industry. I am very pleased to introduce Kylie Rocket as my “Girl of the Week” here on AAN.