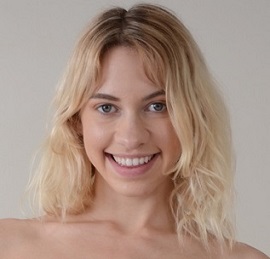 Girl of the Week – Khloe Kapri

This week we are introducing you to a vivacious blonde  who has that sweet girl next door look, but don ‘t let that fool you. She has been on the scene for a few years and continues to turn out some excellent performances. This Buckeye has all the qualities to become a top star. Her name is Khloe Kapri.

It all began when Khloe came into this world on October 13, 1997. She was born in Cincinnati, Ohio and that is where she was raised and went to school. She was a good student and after high school attended college studying architecture.  But it was a spring break trip to Miami that changed her career path.

After getting to Miami, and always being of a sexual nature, Khloe came across the Florida based BangBros, MOFOs and Reality Kings. She decided to check them out and see what might happen. Once they saw this blonde beauty it was a no brainer and she began to shoot some scenes for them,

That all took place in early 2017 when she began to shoot some scenes for the companies and had no problem with it all. She fell right in to plac  with it and her new career was born. Aside from those labels Khloe also did some scenes for Screwbox, Babes.com and Naughty America the same year.

From that point on Khloe headed out to Los Angeles to further her new career and once she arrived things really took off. She began working with some of the top stars and starlets in the industry like Elsa Jean, Alexis Fawx, Kenzie Reeves, Dana Dearmond and many more. So far this dazzler has done about 200 scenes and her fan base continues to grow.

Now she was shooting films for some of the big boys in the industry like new Sensations, Digital Sin, Lethal Hardcore and the Greg Lansky Vixen label. With each new project Khloe showed that she was more than a sex performer, but also into the cosplay scenes and able to be a competent actress.

There is a lot going on for this born and bred Buckeye and it is all good. She is a very talented young lady with a great look and super body. She lights up the screen with that smile and her all out sexiness. I see some very big thinga head for her in the industry, so keep an eye on this young lady. I am very pleased to introduce Khloe Kapri  as my “Girl of the Week” here on AAN.