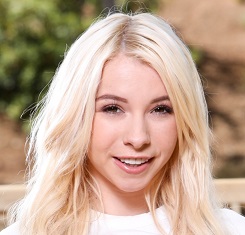 This week we re-introduce you to a pint sized blond beauty who proves big things come in little packages. She has been on the scene since mid 2017 and continues to climb the ladder of success in adult garnering several award nominations along the way. While the COVID-19 pandemic has halted production, this young lady has found ways to keep her fans entertained. Her name is Kenzie Reeves.

This petite bundle of sexual energy was born on July 7, 1997 in the home of the Green Mountains, New Hampshire, where she grew up and did all her schooling. She was very active in sports, hung with older crowd and enjoyed the simple things and she also is an avid horseback rider. Kenzie loves the changing of the colors but can’t stand the brutal New England winters.

She worked at a local Taco Bell for a time, but when she turned 18, she decided to become an exotic dancer. For the next year and a half she made a good living dancing at various gentlemen’s clubs all over the country. At this point Kenzie felt there were even better adult industry opportunities, so she began checking out the site SexyJobs.com

It was quickly obvious that this tiny spinner had it all and was going to be something special. In Kenzie’s own words, “I wanted to try something new, and I love being a playful sex kitten. I do. I enjoy sex, pleasuring other people. I like to tease”. With that mantra this young lady was off and running as the film work and web scene work kept on coming her way.

Since that debut in 2017 she has been a very busy girl racking up more than 400 web and film scenes and for many of the top companies in both film and web scenes. She has done films in a variety of genres for Evil Angel, New Sensations, Purgatory X, Jules Jordan, Adam & Eve, Digital Playground, Girlfriends Films, Sweetheart Video and more. She has done web scenes for realitykings.com, nubile.com, girlsway.com, teamskeet.com and others.

If, for some reason, you have yet to see this all natural and very talented bundle of dynamite here are a few suggestions for you. There is “Caught in  the Act” for Purgatory X,  the Will Ryder sex comedy “Love Emergency” for Adam & Eve, “Oil Slick 3” for Evil Angel and the just released “Family Favors 2” for Family Sinners. You will become a fast fan for sure..

She may be tiny, but as we said big surprises come in little packages and this girl is the total package. With the COVID-19 pandemic shutting things down, fortunately Kenzie had a couple of things already done that have been released. When the industry returns we see a lot of big things ahead for her. I am very pleased to re-introduce Kenzie Reeves as my “Girl of the Week” here on AAN.