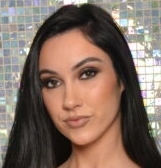 This week we present another of the newer shining stars of adult who has really become one popular young lady. She joined the adult industry in 2020 and didn’t waste time making an impact. Even with the pandemic slow down she kept herself busy building up her fan base with some sizzling web scenes, shows and even a film or two. With her great looks, dazzling smile enthusiasm and talent she has all the qualities to go far. Her name is Jazmin Luv.

Jazmin also did some time working as a stripper for a couple of months. That was mainly to build of her own confidence and also help with her curiosity about the adult business. She watched a lot of documentaries about the business, did some of her own research and decided that this was where she wanted to belong.

Making the decision to follow her instincts she wound up getting signed by Motley Models for representation. It didn’t take long for Jazmin’s new career to get started. She got started doing t some very hot scenes for Net Video Girls and it quickly became obvious this young lady had what it takes.

She quickly gained a budding fan base and in June 2020 was the Penthouse “Pet of the Month”. Then along came more web scenes and then the jump into films along with being part of Adult Tome’s new series in mid 2020.   From her various scenes there was no question that this all natural, sexy and extremely talented young lady was on her way.

Fortunately, there were some great scenes done by Jazmin before things went dark. Now, since the industry is back with  new productions this talented young lady is at it once again. Check her out in   “Lesbian Passions 28” for Girlfriends Films, “Cute Little Babysitter 10” for New Sensations, recently, “Cute vs. Sexy II” for Web Young and the steamy “Net Skirts 24.0” for Girlfriends Films. Plus there is even more to look for from this super talented girl.

Now that the industry is back in full swing, you can be sure you are going to be seeing a lot more of this very attractive, talented performer. She has shown that she can do it all, whether it is boy or girl, she has shown some acting ability which will only get better. The road ahead holds a lot of promise for her future in adult films. I am very pleased to introduce you to Jazmin Luv as my “Girl of the Week” here on AAN.