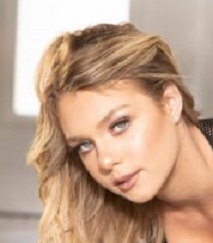 This week we once again bring you another of the new faces who is making their mark in adult films. While this Texas girl, who is just nineteen, hasn’t been in the business a full year yet, she has made an explosive and eye catching presence. She is definitely one to watch. Her name is Gabbie Carter.

An all natural blonde with some very artistic tats she was born on August 4, 2000 in the great city of Austin, Texas. A very athletic girl she grew up playing golf since she was five years old. In school she was on the varsity team and has shot rounds in the 70’s. She might have pursued that sport, but she had other ideas.

Gabbie says that in school she felt like an outcast and that a lot of the kids didn’t take the time to get to know her. When she finished school she took on jobs as a restaurant hostess. She worked in a variety of places, a pizza parlor, seafood restaurant, a Mexican restaurant and an ice cream parlor, but another calling would soon happen.

From there she checked out an ad on the SexyJobs. Com site and came across matrix Models. She talked with owner John Stevens about the possibilities of doing some adult work. Then it was hopping a plane and heading to Los Angeles. She met with John and wound up doing her first scene and the rest, as they say is history!

Needless to say Gabbie’s debut was  not a “one and done”, but just the beginning of what has become a whirlwind first year in the industry. Not only has she been working steady churning out some explosive scenes, but she has been blessed to work with some of the best people in the industry.

In this short time Gabbie has displayed her sexual talents and acting chops for none other than Greg Lansky and his Tushy, Tushy Raw, Blacked and Vixen labels. In addition she has also shot a couple of scenes for Kayden Kross at Deeper.com, which is also a Lansky project. Check her out in the new release “Relentless” for Deeper.com. Not bad for a new girl!

There is an awful lot to like about this stunning young lady. IOt is obvious she has the look, body and talents to make a fast move to the top. While it is all still new for her, the future looks extremely busy and bright. She is definitely one young lady to enjoy and keep a close eye on in the future. I am very pleased to introduce you to Gabbie Carter my “Girl of the Week” here on AAN.