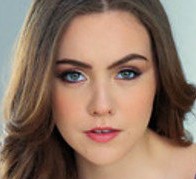 This week we introduce you to a very striking young lady who is rapidly move up the ladder in adult films. She is also a worthy nominee for Best New Starlet in our upcoming NightMoves Awards. You can vote for her, as the link will be provided at the end of the feature. Meet Freya Parker.

At 5’ 10, with silky brunette hair, piercing, expressive green eyes and an all natural body, Freya makes quite picture of sheer sexiness. After that initial debut this winsome beauty began getting calls from a number of web sites and film companies and directors. Her career was on the way, but then along came the pandemic.

Freya kept doing scenes, used her OnlyFans site to give her fans plenty to enjoy and increase her viewership. She also found herself doing scenes for labels like Vixen, Deeper, Girlfriends Films, reality Kings, New Sensations, Girlsway, Naughty America and others. One of her early highlights was getting to do a sex scene with Manuel Ferrara, who she had a mad crush on. Titled “Under My Skin” it was directed by the award winning Kayden Kross.

If you have not had the pleasure of seeing this young lady in action then here are a few suggestions for you. Check her out in “Duplicity” for Wicked Pictures, “Cravings” for Slayed, “Obsessed 2” for Sweet Sinner, and the brand new “Sexual Icons 2” for Hard X. Boy/girl, girl/girl, drama, she can do it all.

This young lady has all the talent in the world, plus the looks and body to go along with it. I see nothing but bigger and better things ahead for her the remainder of this year and into the future. As we said in the beginning she is a nominee for Best New Starlet at our upcoming NightMoves Awards and you can vote for her and all your favorites by going to: https://nightmovesonline.com/vote-now/ So get your votes in today. I am very pleased to have Freya Parker as my “Girl of the Week” here on AAN.