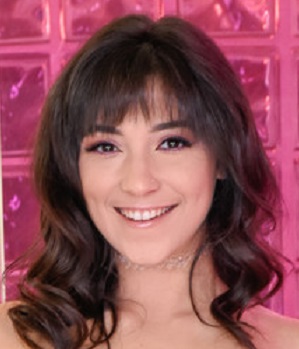 This week we re introduce you to one of the newer shining lights in adult. This young lady has been in the industry for a couple of  years now. She quickly gained notice and was kept very busy right up until the pandemic shut things down.  She is also a nominee for Best New Starlet in our upcoming 29th Annual NightMoves Adult Awards Show and you can vote for her. The link will be at the end of this feature.Her name is Brooklyn Gray.

Her career was really moving along and 2020 was beginning to look like her big breakout year. Then along came COVID-19 putting a halt to the industry for the majority of 2020. Fortunately Brooklyn had done some films prior to the lockdown that either came out just before the shutdown, or recently since things are beginning to get back to some sort of normalcy.

Now that the industry is beginning to come back you can look for  even more hot, new scenes from this talented performer.  There are bigger things ahead for this  talented young lady and I am sure a lot of award nominations will come her way as well. Remember we said she is a nominee for Best New Starlet in our upcoming awards show and you can vote for her and all your favorites, just go to :https://nightmovesonline.com/vote-now/  she is counting on your vote. I am very pleased to re introduce you to Brooklyn Gray as my “Girl of the Week” here on AAN.

Girl of the Week – Evelyn Claire