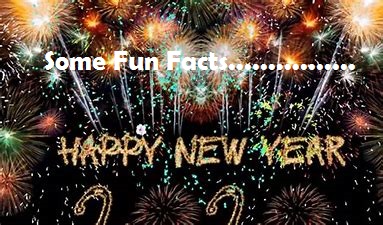 We are less than a week away from putting an end to 2021 and the beginning of a new, and better we hope, year 2022. So with that in mind here are a few fun facts about new Year’s you may or may not know. Enjoy.

Julius Caesar declared the first of January to be the start of the New Year. …

Noisemakers scare away evil spirits. Making loud noises on New Years Eve became tradition in order to ward off evil spirits and bring in good luck for the upcoming year.

The ball drop started because fireworks were banned. The first Times Square New Years Eve ball drop was in 1907 as an alternative to fireworks. Instead of fireworks, the ball they lowered weighed 700-lbs and was made of wood and iron.

There is confetti… lots and lots of confetti. At the Times Square celebration alone, at least 2500 pounds of confetti is dropped at midnight.

In parts of Italy, people welcome in the New Year by tossing old things out of their windows. By tossing out the old, they make room for new and lucky things to enter their households and lives in the coming year.

Enjoying a glass of champagne is a common New Year’s tradition. Originally popularized in the court of Louis XIV, the associations with wealth and royalty trickled down to the middle classes as a form of “aspirational drinking.” Over time, bubbly became associated with celebration, and in the 19th century, newspapers began to associate champagne with holiday family gatherings. By the 20th century, champagne became a must for New Year’s Eve, and it’s now a staple of New Year’s celebrations.

In Spain, eating grapes at midnight is both a tradition and a superstition. At the stroke of midnight, Spaniards eat 12 grapes symbolizing 12 lucky months ahead. In some areas, the grapes are also believed to ward away witches and general evil.

In the American South there is a tradition of eating black-eyed peas and collard greens on New Year’s for luck. Black-eyed peas bring good luck, and the greens signify money and ensure a prosperous new year. The tradition was originally African, but spread through the South, especially the Carolinas, and can now be found on restaurant menus throughout the South

The song “Auld Lang Syne” is synonymous with New Year’s Eve. The version of the song that’s most widely sung today is based on a poem by Scottish poet Robert Burns. The title translates literally to “old long since,” but is really more like “old times” or “olden days”.

In 2014, Dubai lit up the sky with a huge New Year’s fireworks display. The extravaganza featured over 400,000 pyrotechnics firing over 400 parts of the Dubai shoreline. The display got a Guinness World Record for largest firework show ever.

Dick Clark hosted the New Year’s Rockin’ Eve from 1973-2004 until complications from a stroke forced him to turn over hosting duties to Ryan Seacrest. In 2012, the show peaked at 22.6 million home viewers, and has consistently been the highest-rated New Year’s special broadcast in the U.S.

The ball in New York City has dropped every year but two since 1907. Due to a citywide “dim-out” to cut back on energy costs during World War II, and to protect the city from Axis bombings, New York City took a hiatus from dropping the ball in 1942 and 1943. Instead, the crowds observed a minute of silence.

New Year’s Eve ranks fourth on Americans’ list of favorite holidays, with 41% of the population calling it their favorite.

Sydney, Australia, is amongst the first cities to celebrate the New Year, thanks to its time zone ahead of many territories.

According to statistics from the National Insurance Crime Bureau, more cars are stolen on New Year’s Eve than any other night of the year. Moral of the story? Take a cab!

Finally, as for the ball for the drop this December 31, 2021 to ring in the new year here are just a few facts…………….The Ball is a geodesic sphere, 12 feet in diameter, and weighs 11,875 pounds.
The Ball is covered with a total of 2,688 Waterford Crystal triangles that vary in size,
and range in length from 4 ¾ inches to 5 ¾ inches per side. For Times Square 2022, 192 Waterford Crystal triangles introduce the new Gift of Wisdom design. The Ball is illuminated by 32,256 LEDs (light emitting diodes). Each LED modulecontains 48 LEDs – 12 red, 12 blue, 12 green, and 12 white for a total of 8,064 of each color.The Ball is capable of displaying a palette of more than 16 million vibrant colors
and billions of patterns that creates a spectacular kaleidoscope effect atop One
Times Square.

There you have some fun facts about new year’s and New year’s Eve…….There are a number of websites to find out even more including this one https://factcity.com/facts-about-new-years-eve/ We wish all a very Happy and safe New year with hopes that 2022 will get us back to normal.

SWSK – It’s All About Cars!

Some Hidden Facts about “The Wizard of Oz”