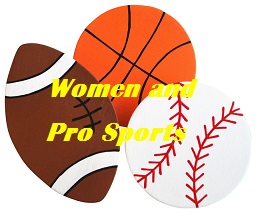 I was going to get on my soapbox this week, but recent developments in MLB made me change my mind. This week I am going to discuss my thoughts, feelings and projections regarding women in the four major pro sports and the long overdue changes that continue to evolve and take place.

Over the past ten years we have seen a slow evolution of qualified women entering into the world of men’s professional sports and it has been very encouraging. However, this is not something really that new, it is just that times have changed and the evolution of women taking their place in men’s pro sports. Go back to the late 70’s and early 80’s when a young lady by the name of Pam Postema became the first female umpire in professional baseball beginning at the Class A level. She graded very good, was respected by many players and managers and even worked some spring training games. She continued to move up the ladder to Triple A, but despite the good grades was never given the opportunity to become a ML umpire. Unfortunately in MLB that prejudice still remains, while both the NBA and NFL have embraced female officials over the past ten years or so with some very qualified ladies handling these men’s games and grading very well. While there are no female officials in the NHL yet, there are a few in the NHL’s minor leagues.

As for the NFL, not only are there female officials on the field, but also active coaches on the sidelines. A number of NFL teams have one or two female coaches on their squads, the Cardinals, 49’ers, Chiefs, Falcons, Washington, Browns, Broncos and Bills. Our own Tampa Bay Buccaneers have three female coaches in various roles as well. Lest you think these are just token jobs, think again. These are extremely important in game positions dealing with defense, special teams, offense, conditioning, etc. In the NBA it is the same thing as teams like the Mavericks, Bulls, Wizards, Grizzlies, Cavaliers, and Spurs are among those with female assistant coaches. One of them, Becky Hammon of the Spurs has also taken over several games for the Spurs as head coach and has been on the interview list for head coaching jobs in the NBA and WILL land one in due time.

Did you know about the Premier Hockey Federation? It is an all female professional hockey league that has been in operation for about 8 years. It has six teams and three of them, Minnesota, Boston and Buffalo also have development deals with the NHL Wild, Bruins and Sabres. There is also the WFA, the professional Women”s Football Alliance that has been going since 2010 with teams all over the country including one right here in Tampa, the Inferno. So get ready because these women are proving that they can do what many said they couldn’t do in a “man’s” game.

Now has come the most historical move regarding women in men’s pro sports, and it was made by the New York Yankees. You all know my deep seeded hatred for the Yankees that goes back over sixty years in a very personal way. So when I applaud them or give them credit for something it has to be very special. The historical move was the Yankee’s naming Rachel Balkovec as the manager of the Class A Tampa Tarpons minor league team. Ms. Balkovec is extremely qualified, but of course all the Neanderthal male chauvinists have been coming out of the woodwork. Some of the comments made on various message boards have been downright nasty, ignorant, stupid and chauvinistic. On the other hand there have been many more from both men and women that have been congratulatory and also very intelligent and positive.

As for qualifications for the 34 year old, she was a top flight college softball player at both Creighton University and New Mexico. Ms. Balkovec worked as a strength and conditioning coach in the St. Louis Cardinals and Houston Astros organizations. She also worked as a hitting coach with the Astros. She joined the Yankees in 2019 as a minor league hitting instructor. In 2021 she was based in Tampa where she worked with the Tarpons and other rookie players with the Gulf Coast rookie team in the organization. In addition she has also been a coach for the Dutch National Team and was the hitting and pitching coach for the Sydney Aces of the Australian Pro League, which is equivalent to Double and Triple A ball in the states. It is also interesting to note that she had been hired originally by Dillon Lawson who was the Yankees hitting coordinator at the time. Just last month Lawson was named the Yankees hitting coach.

Thankfully the commissioners in all of the leagues have had a very open mind and have never tried to stop the progress of women coming into the sports world as executives, coaches, etc. from taking place as several MLB teams, the A’s, Cubs and Giants to name a few all have female coaches on their staff.. Just think back, if Judge Landis MLB’s commissioner back in the day had not died in 1945, you would have never seen Jackie Robinson or any other black player break the color line and it might have been years before it took place. But these commissioners today have been very open and supportive when it comes to the various roles women can handle and achieve in pro sports alongside the men and for that they should be applauded.

So while some of the detractors continue to put ground breaking events like this down and make fun of  them, it only gives these female athletes and coaches more fuel to add to their fire and prove the “good old boys” wrong. I have said it before, and will say it again. You WILL see a female kicker in the NFL within the next 5 years. As someone who has followed sports since the days of WW II, I am glad to see these kinds of changes taking place in all sports helping to make the games appeal to a much broader audience and give it a shot of sorely needed new blood. Keep on keepin’ on ladies!

ADDED NOTE: Just last week Genevieve Beacom, 17, made her professional debut pitching for the Melbourne Aces of the Australian Professional League. The team is managed by former ML pitcher Peter Moylan and he said this young lady is no token piece, she is the real deal and will be a major part of the Ace pitching staff.